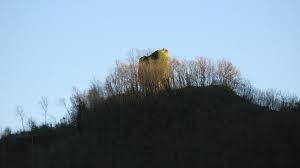 Following the one about the Byzantine Corridor, I will continue with the series of articles dedicated to the territory of the Pesaro-Urbino Province.
Not being a professional historian or archaeologist but just a passionate self-made researcher, I will very unlikely propose original topics or writings, but I will humbly limit to re-read (and sometimes to re-discover) in a less academic way books treating local history and folklore, always with the aim to bring more people to be curious and interested in our magnificent territory, and as a consequence to contribute in protecting it in all its beauty.

My reference book is this time a short work dated 1981, “Le torri del Montefeltro e della Massa Trabaria” (The Montefeltro and Massa Trabaria towers), by Francesco Vittorio Lombardi, that will take us to deepen a bit more the knowledge of the history of the many fortresses raised in the higher Metauro river Valley.

Let’s start from the name, why Massa Trabaria?
The Massa got its name during the late Roman Empire age, and it was nothing more than a wide land property created from groups of smaller rural plots, abandoned by the owner due to the emerging agriculture crisis.
Trabaria comes from “travi”, the italian word for beams, referring to the logs since long time cut and sent down to Rome, crossing the Appenninis first and floating on the Tiber river later on, to be used for the construction of the religious buildings.

The Massa Trabaria was for this reason historically always linked to the Church and its tributes arrived directly to St. Peter’s Cathedral, and in fact this area was originally known as Massa Sancti Petri.
With the beginning of 1200 the German Emperor Otto IV recognized the region as autonomous and its extension eventually covered the today’s territories of Sant’Angelo in Vado, Mercatello sul Metauro, Sestino and Belforte all’Isauro. In this wide area were present many small rural communities, independent themselves from each other but connected to the same institution called Communis et Universitas Massae, whose inhabitants were commonly known as “massani”.

The Massa remained anyhow tied to the Roman Church and was for this reason always fighting against the neighbour Ghibellines from Montefeltro and Carpegna. It also had to defend itself from the expansive goals of Città di Castello, and the massani were forced to organize huge defensive systems. The communities strengthened the walls of the villages and erected towers, most probably in the same locations where many centuries before were the Byzantine ones, which had protected the Flaminia and Romania territories from the Goths and later from the Lombards. The new towers were raised to spot the enemies from far away, to allow the soldiers to warn with fires or horn blows the people in the villages, so that they had time to take shelter. Furthermore the towers were also a reference for all the merchants coming from Tuscany or from Rome and willing to reach the Adriatic sea, or for all the pilgrims coming from Northern Europe, who had to necessarily pass through the Massa and the Montefeltro on their way to Rome.
Despite the fortresses the Massa was not able to remain united, and during 1300 many areas became subjugated to several local powerful families (Faggiola, Brancaleoni), until they again joined the Papal State thanks to Cardinal Albornoz, during his “reconquista” mandate from Pope Innocenzo VI.
Unfortunately the new split that stroke the Church in 1378 brought back chaos in Italy and in all the Church lands, and the territory was in the end partitioned by valley among the local families and the Church itself, causing with time the loss even in the common memory of the identity of the Massa Trabaria and its towers, some of which crumbled while the others were worn out by time, wars and earthquakes.

Also you can find more information visiting the following website

By continuing to use the site, you agree to the use of cookies. more information