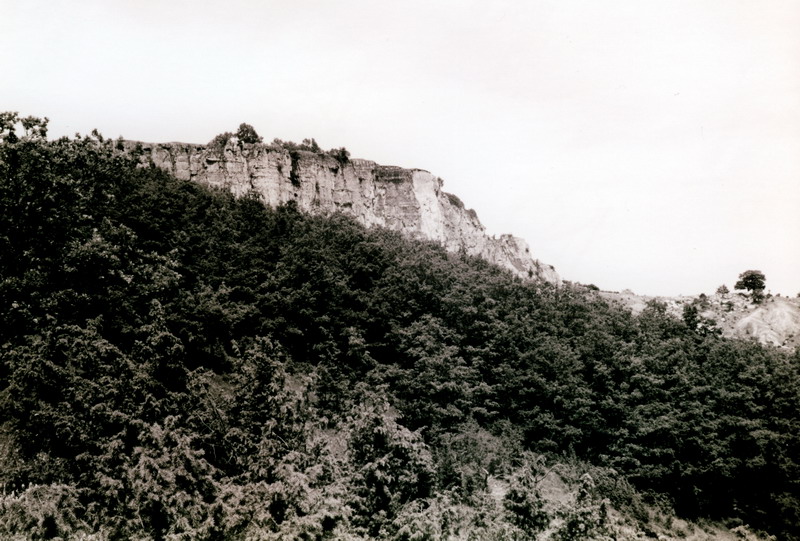 While preparing for the next trek inside the Sasso Simone and Simoncello Regional Natural Park here is a short article on the Città del Sasso or Città del Sole (City of the Sun), with the only intent to refresh the common memory and inviting everyone who wants to dive deeper into the subject to use the many sources of information available.

We are in 1566 and on top of the Sasso Simone plateau we can attend to a very special beginning of “construction works”. At that time the Sasso Simone and Simoncello are included into the Tuscany Grand Duchy, right on the borders with the Montefeltro ruled by the rivals Dukes of Urbino, and Cosimo de Medici (the ruler of Tuscany) is inaugurating a project considered absurd by many, build a real city right on top of the bigger Sasso .
I will try here to get back to the origins of such idea, but in order to do that I will need to take a digression back to the history of Italy in 1500, promising to simplify as much as I can the very complex chronicle of the events.

Italy was not in the middle of a quiet period, fragmentation and confusion were ruling on all the peninsula brought by the passage from the Middle Ages to the Modern era. In the North Milan, Venice and Florence were the strongest powers. In the South, possibly the most stable area, the Kingdoms of Sicily and Naples were united under the Aragones, while some of the Maritime Republics were still holding the power at sea. The Pope had control on most of the Center, but still many areas were in fact ruled by local lords. 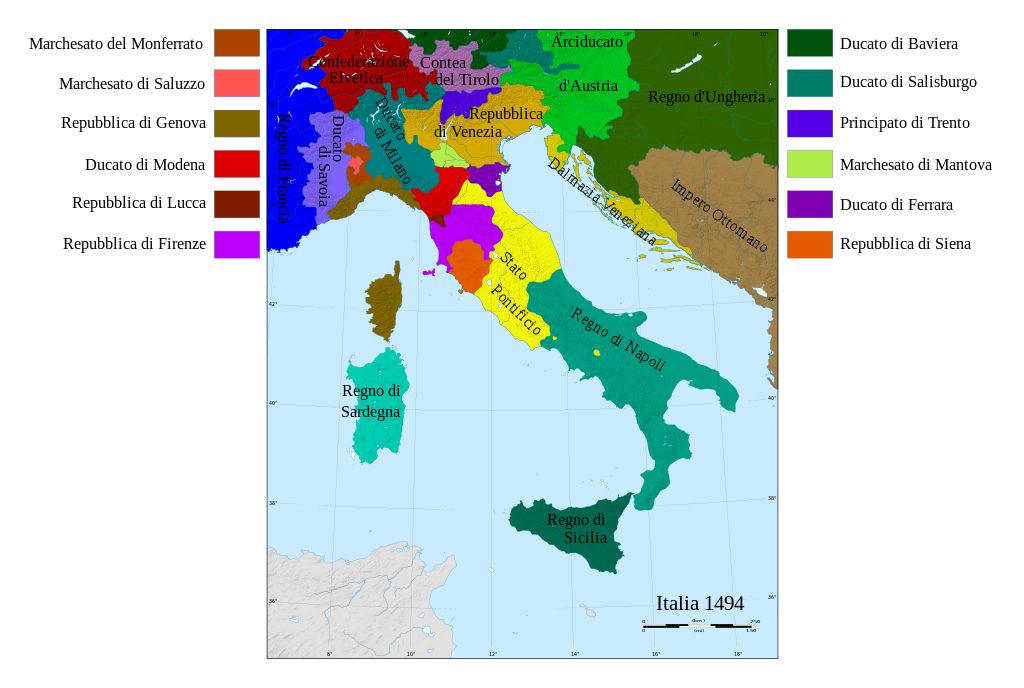 In this scenario explode the so called “wars of Italy”, with Spain and France as protagonists and antagonists. The two rival countries battle for the supremacy in Europe for over seventy years right on Italian ground, transforming it by fact in a battlefield at the mercy of the two contenders, and bringing destruction and plunder all over.
Charles VIII of France is the first to invade Italy in 1494 traveling through the ancient Via Francigena and meaning to seize the Kingdom of Naples since he considered himself in some way its legitimate heir for his lineage from the Anjou family.
The French King conquers Naples with the help of Pope Alexander VI Borgia, who is forced to allow him to pass through the Church territories but is also sending his son Cesare, who will become an important figure in the coming years, along with him as a guide. The French predominance does not last long and the troops are forced to go back North through Italy pushed by the power of the league made of Milan, the Papal State and Venice, merging forces also with Spain and Austria.
Louis XII succeeds Charles VIII and gets from him his mania of grandeur, thinking he also has inherited rights on another piece of Italy (this time the Duchy of Milan). He passes the Alps in 1499 and, with the help of the Borgias, his troops enter Milan and conquer Naples in a very short time.
As if Spaniards and French were not enough, also the Borgias join them in ravaging the Center of Italy. Cesare Borgia (the Valentine Duke in the Machiavellis’ “Prince”), after becoming the lieutenant of Louis and taking the lead of one of his military units, marches towards Romagna to complete a plan prepared since a long time together with his father, the Pope. The Borgias have in mind to take the power from all the local rulers who are too independent from the Mother Church, and aim to create private family Kingdom in that region. One after the other must surrender to Cesare, among others, Caterina Sforza, the Malatesta, the Montefeltro and the Da Varano families. Not satisfied with the gaining predominance on the Adriatic Coast area, Pope Alexander drives Cesare to march to Perugia and then to Tuscany, where he wants to take control also of Siena and Pisa. But all of the sudden Alexander VI Borgia dies in 1503 and Cesare loses power little by little, until with the election of the new Pope Julius II Della Rovere (the Della Rovere family is enemy with the Borgias) all his power on Romagna is taken away from him and he is imprisoned in Castel Sant’Angelo.
In the meantime the war between France and Spain continues, and with Charles V becoming Emperor of Spain and Germany it gets to its most resounding part. In order to stop his goals towards Italy in 1526 a new league is formed by France, the Pope, Venice, Florence and other minor Italian states. Their army is led by Giovanni de Medici (aka Giovanni dalle Bande Nere) and Francesco Maria I Della Rovere, Duke of Urbino. Before officially entering in the war though, the “allies” are defeated by the terrific Landsknechts, penetrating from Sud Tirol into Central Italy and devastating it once again before marching towards the famous “Sack of Rome” in 1527.
The fights bewteen the two super-powers carry on until 1559, when finally peace is signed by granting Spain control on most of the Italian territory, and defining the new borders for all the other states, among which was the Grand Duchy of Tuscany.

Cosimo de Medici, the creator of Città del Sasso, is the new lord of Tuscany and is the son of Giovanni dalle Bande Nere. He has lived in first person the time of the invasions and his government style is, as a consequence, authoritative and aiming first of all to defend the territory. He is also a forward-thinking sovereign in administering justice and in building infrastructures, besides being an art lover and the initiator of many works to improve the architecture in Florence (he is also the builder of the Uffizi palace, which was originally the location of his administration offices).
The bustle of the armies passing through Italy during the wars brought terror among the people, and the fear of new conflicts made the need of defense a priority for whoever was in charge of any Italian state in those years, especially for Cosimo who was ruling on the most stepped-on one among all.
Sansepolcro, Arezzo, Siena, Volterra, Portoferraio, the Terra del Sole (Eliopoli) near Forlì and Città del Sasso are just a few examples of castles built from scratch or on top od older ones by Cosimo de Medici, following a methodical plan to reinforce the security on the Tuscany borders. 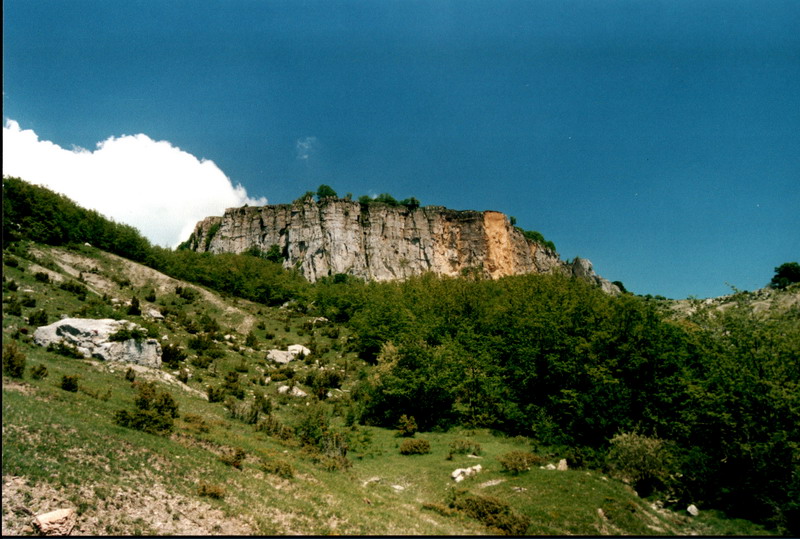 Despite these “military” premises, Cosimo is not actually thinking just about defending his lands, but he wants to build on Sasso Simone an ideal city, scaring the neighbors and being impregnable, but also becoming at the same time the prototype of a geometrical and architectural perfection, plunged into nature.
The will to proceed is very strong, and the motivation eventually even increased after the first survey on Sasso Simone back in the Summer of 1554, several years before the beginning of construction, when everybody completely understood the beauty and the strategical importance of the site. Moreover in the years between 1450 and 1570 the climate in our area is particularly mild, and on the Sasso it is possible to grow barley, peas and linen, so the idea of building a city on the mountain may have seemed particularly awesome, bringing some to even talk about a City of the Sun.
Cosimo knew that before him already the Malatesta family had thought about building up there a fortress that could compete with San Leo, and that on the Sasso had lived a few Benedictine monks since the year 1000, in the abbey built on the ruins of an older Lombard church dedicated to the “same old” Saint Michael Archangel (see the article on the Byzantine Corridor).
The work goes on, after laying the first stone, very intensively for ten years, and in 1573 the first permanent garrison with ten soldiers is sent to the mountain.
The project considers to build 50 houses, a residence for the captain, a prison, a chapel, a water tank, two towers and walls all around, to host 300 people. There is also a plan to build a colonnade outside the walls, to host a fair in the summertime. The Città del Sasso was supposed to become one of the biggest (if not the biggest) communities in the area.

The City of the Sun from the town of Carpegna website

The administration in Florence was trying to keep the work under control, and in fact an important picture explaining what was going on on the Sasso comes from the report of the inspection made by Baccio Del Bianco and Vincenzo Viviani in 1644, sent to check whether the city was reinvigorating or if it was gradually losing its mojo. The inspectors describe three blocks, called based on the communities that had built them, with the names of Sestino, Borgo San Sepolcro and Pieve Santo Stefano, for a total of about 40 houses. Each house had a yard and in the city were living a blacksmith and a horse keeper.
The two men do not even lack practical details in their report, explaining for example that too much timber was being used, subject to deterioration, and that the heads of the beams needed to be “bronzed” to avoid collapses.
Despite the efforts and the investments the health conditions of he city did not appear to be too good. Furthermore the other cities in the area did not like to be downgraded and the people dissatisfaction against the City of the Sun did not help who wanted to invest more in the project. The years pass and the fortress cannot reach the importance that Cosimo had hoped for. It seems that even the few military expeditions in the area did not start from the Sasso Simone, making even the military role of the site seem quite useless. At the end, to make things worse, after the period of mild weather that had been so favorable in the beginning, came also what is now called the Little Ice Age, dropping the temperatures everywhere in the northern hemisphere until 1800, and forcing the few inhabitants of Città del Sasso to completely abandon the mountain in 1673, finally preventing Cosimo de Medici’s dream of an ideal city to come true.

Nowadays little remains of that dream except for the cobblestones of the road to the top, the water tank and some wall ruins.
What is still there though is the beauty and the charm of this magical place, explaining even today how it was easy to dream and imagine a City of the Sun right up there.

By continuing to use the site, you agree to the use of cookies. more information